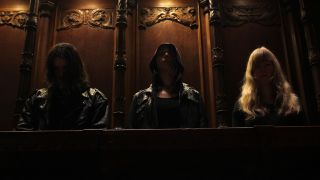 Lovers of the occult, and the generally orgiastic rites of old-school heavy metal, the time to don your robes is soon upon you once more!

New York’s spooky doomsters Occultation are heralding their forthcoming new album, Silence In The Ancestral House, due on October 14 via Invictus Productions, with a glorious new track, Laughter In The Halls Of Madness, and we are very proud to be its chosen medium.

Recorded by Kurt Ballou in Salem, where the faintest whiff of burned witch still hangs in the air, the follow-up to 2012’s Three & Seven album looks set to storm the same hallowed halls as Ghost BC and The Oath as their eerie, atmospheric yet accessibly groove-laden jaunts through the ether will have you dancing on the nearest grave. Open your arms wide and breathe in the musky incense of Laughter In The Halls Of Madness below!