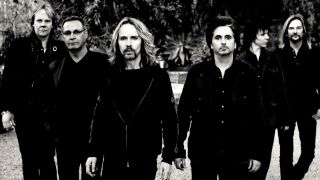 Styx’s next album “has to be different” from their previous material if they want to succeed, bassist Ricky Phillips says.

The band haven’t issued an album of original material since 2003’s Cyclorama – with mainman Tommy Shaw insisting they’d be “taking their time” with the follow-up last year.

Now Phillips says they’re considering re-entering the studio – but their sound will need to have a new “twist.”

He tells Sleaze Roxx: “Yeah, it’s on the table. We’d love to do something new. It has to be different. It has to be something that Styx hasn’t done. We want to ensure something isn’t ‘just another Styx record.’ It has to have a twist.

“We’re aware that it will be fodder for the press, but so be it. Also, something like that will go over well with one person and a failure with the next.”

Phillips admits that times have changed since Styx’s heyday in the 70s and 80s – with bands relying more so on touring and merchandise sales rather than selling records to survive.

He says: “It’s not a money maker. We have a road crew that relies on money to keep their families fed too. We have to sustain it and we don’t do this from music sales anymore.

“In terms of numbers, we don’t sell millions of records anymore. The sales that Styx, Foreigner, Journey or REO Speedwagon had back in the 70s and 80s – based on today’s sales, it’s going to be considered a huge failure.

“It’s a different time but you’re right, but we do need to put out some new music out soon.”

Phillips also says a concept album from the project he started with the late musician Ronnie Montrose is due out next year.

The Gamma guitarist died of a self-inflicted gunshot wound in 2012. Though he died before he could record his guitar parts, Phillips asked musicians they both admired to fill in.

He adds: “There’s a great mix of singers and guitarists on there. I have Glenn Hughes on a track with Phil Collen from Def Leppard playing the solo, Sammy Hagar featuring Toto’s Steve Lukather, and Eric Martin, I paired up with Dave Meniketti and so on.

“We have Joe Bonamassa on there too, and Brad Whitford – who is the unsung hero to both Ronnie and I in Aerosmith.”

Styx will commence their US tour later this month.

Styx And Their Long Fall From Grace