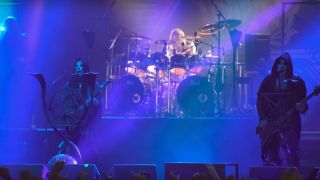 The study was carried out by Krzysztof Izdebski of the Pacific Voice and Speech Foundation who used hi-tech, high-speed imaging of the throat in his research.

He discovered that when most people shout or scream, their vocal cords collide which can cause hyper vascularisation, ulceration, bleeding or swelling – but that’s not the case in both infants and singers.

Izdebski tells Inside Science: “Heavy metal singing is essentially what a baby does.

“A little baby has all the sounds – it has the sounds of scream and growl, and inhalation and high pitch and whistle and low pitch. We learn from the beginning. We have it and then we somehow lose it.”

He continues: “A heavy metal growl is one of the most aggressive sounds – and singers can do it over and over again.

“The images that we recorded clearly show that it’s produced predominately by structures above the glottis. So, the vocal folds open and vibrate but actually don’t collide.”

Izdebski says his research has given him a newfound respect for heavy metal vocalist and adds: “These guys produce really very specific tasks and very specific melodies that are then supported by instruments.

“And it’s not just kind of going on stage and screaming and doing sort of random stuff. They really compose this stuff.”