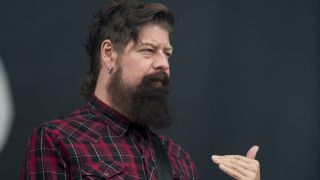 Jim Root has compared his firing from Stone Sour to escaping a sinking ship.

The guitarist was dismissed last year, although it was only made public in May. He’s still working with Corey Taylor in Slipknot and co-wrote much of the material on latest album .5: The Gray Chapter.

But he’s still guessing as to why Stone Sour decided to get rid of him.

Root tells The Pulse on TeamRock Radio: “I spent 12 years helping that band, writing songs for that band and doing things for them. When people conspire and turn their back on you because you have a bigger obligation to get to, it’s a little bit like, ‘Well, I guess that’s that.’

“But when people don’t give you any reasons then all you can do is speculate. If people are going to make decisions like that for their career, I honestly would rather get on the life raft and get away from that sinking ship.

He continues: “Maybe there’s neurotic people who are nervous and don’t know what their future is – so they have to make rash decisions to try to make sure they have a future. But that’s short-sighted. I tend to look past the end of my nose for my future.

“Hey, if that’s what they feel they needed to do so they could go play another month’s worth of shows and do a cover record, then more power to you, have fun with that. I know where my passion lies and where my brothers are.”

But Root admits it was uncomfortable to reunite with Taylor when they went back to work with Slipknot, who tour the UK in January. “It made it awkward,” he recalls, “but we didn’t really have a lot of time to spend together.

“The thing that made it hard was when I had to start talking for myself about what happened. I sat on it for quite a while – until I couldn’t sit on it any more.”

The Pulse with Beez is on TeamRock Radio every weeknight from 10pm. This week’s shows are dedicated to Slipknot after they were confirmed as Download headliners for 2015. Papa Roach, Suicide Silence and Hatebreed have picked their favourite Slipknot tracks, and tonight it’s the listeners’ turn. Tweet @teamrockbelong pick your three favourites and hashtag #SlipknotWeek to cast your vote.