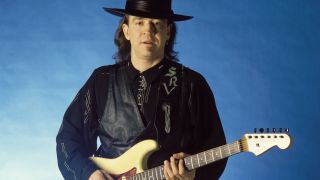 Stevie Ray Vaughan and Double Trouble have topped the public poll for induction into the Rock And Roll Hall Of Fame.

The late blues icon drew over 18 million votes, nearly a third of the total, and put him ahead of Nine Inch Nails, Joan Jett, Bill Withers, the Paul Butterfield Blues Band, Lou Reed and others.

The result means Vaughan will have an additional “fans’ ballot” vote in his favour as the Rock Hall’s panel of industry experts choose between 15 nominees.

While it’s not a guaranteed result, previous fan vote winners Kiss and Rush were both given the honour.

Boss Joel Peresman recently said: “This group of nominees represent the myriad places where rock ’n’ roll converges with blues, electronic, dance, Motown, R&B, funk and other genres. Rock ’n’ roll incorporates the styles of so many different kinds of music. That’s what makes this group of nominees, and this art form, so powerful and unique.”

The final list of inductees for the event in April 2015 is expected soon.