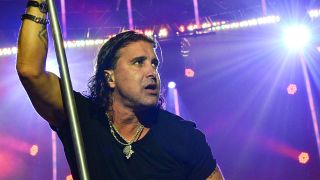 Jagger Stapp has urged his father to get the help he needs and claims the singer has been on a “nine-week” drugs binge.

His comments come in the wake of the Creed frontman’s public appeal for around $500,000 to fund a solo album. And it all follows Stapp posting an emotional video to Facebook saying he was “under attack” and that his bank accounts had been frozen. He later withdrew the video, saying he “should have known better.”

Stapp’s estranged wife Jaclyn also tried to have the singer committed to a mental health facility, saying he had made threats and even warned that his son’s school was about to be attacked by terrorist organisation ISIS.

Now 16-year-old Jagger Stapp has told fans on Twitter that his dad refuses to get help. According to Ultimate Classic Rock, Jagger was responding to a series of posts on Creed’s and his dad’s personal Facebook pages in which Stapp has been telling fans what songs he is listening to.

Jagger’s tweet reads: “My dad is too busy posting songs on his FB hiding out for attention rather than getting his act together.

“To all those confused, my father once again chose drugs over his family. He needs help, but refuses to get it. He’s been on a nine week binge.”

Stapp’s crowdfunding appeal has so far raised around $700 and has sparked a counter campaign, which sets out to stop him making any more music.

Meanwhile, Creed bassist Brian Marshall has followed in bandmate Mark Tremonti’s footsteps in saying he has offered to help Stapp.

Marshall says on Facebook: “I just wanted everyone to know that I’ve reached out to Scott Stapp. We talked briefly yesterday and he seems to be okay. I let him know that we were all worried and if he needed a sober friend to talk to that I’m always available.”