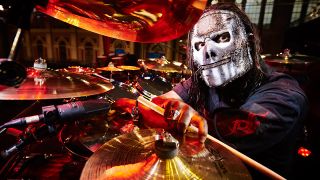 Slipknot’s Jay Weinberg has posted a grisly shot of his drum kit on Twitter, as the band continue to work on their new album.

They’ve been putting the pieces in place for the follow-up to 2014’s .5 The Gray Chapter over recent months, with the record expected to arrive later this year.

Frontman Corey Taylor checked in from the studio last week – and Weinberg has followed that with a shot of his snare drum, which is covered in blood.

Slipknot released their latest single All Out Life in October last year, with Shawn ‘Clown’ Crahan previously telling Billboard that the as-yet-untitled record “breaks down to good v evil, or in this sense, evil v good.”

He added: “It's about being a human being and experiencing what you have in correlating it to this world. This world is ugly and it's supposed to be, and it has to be in order for art to lead to grandness and beauty.”