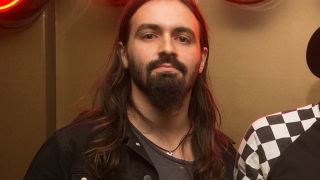 The lead track from the band’s new album We Are Not Your Kind was unveiled in May this year, with Maren’s cover becoming an instant hit on YouTube.

At the time, Maren said: “Jay Weinberg is one of my favourite drummers and I'm excited to cover one of his songs – the moment I heard Slipknot's Unsainted I knew this was the one!"

And Maren got the chance to meet her drumming hero at the Knotfest Roadshow at the Dos Equis Pavilion in Dallas, Texas, on Saturday.

Maren said: “Best day ever hanging out with Jay Weinberg before Knotfest in Dallas! Not only is he a beast behind the kit, but he’s also the most encouraging, kind and generous guy! Really a dream come true to meet and spend time with him – and the Slipknot show was incredible!

“Thank you for everything Jay – you’re the best!”

Maren, who is the drummer for Not Ur Girlfrenz, also plays a SJC Custom Drums kit – the same make Weinberg uses.

Slipknot’s next live appearance will be at Louisville’s Louder Than Life festival on September 27. They’ll follow that with a set at Sacramento’s Aftershock Festival on October 11 before heading to Australia.

They’ll play Knotfest Mexico on November 30 and Knotfest Colombia on December 6 before returning to the UK and Europe in early 2020.