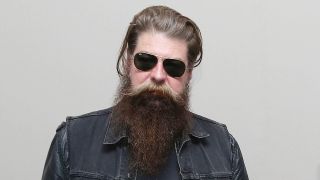 Slipknot guitarist Jim Root has revealed he’s recovering from back surgery, which he underwent just two days after the band’s most recent festival appearance.

He received treatment on Tuesday (October 4), following the band’s set at Louder Than Life in Louisville, Kentucky on Sunday.

Bandmate Corey Taylor had back surgery in July after suffering years of pain.

Root, 45, says via Instagram: “Seems as if fractured vertebrae and haemorrhaged disks are an occupational hazard for metal bands.

“Early in the morning after Louder Than Life, I flew out for disk replacement surgery. Other than being a bit sore and spun out from jet lag and Norco, it’s all good.”

He adds: “Although I won’t be as mobile on stage as before, I’m looking forward to the upcoming Knotfest shows, and the places we’ll be going in between.”

Taylor revealed last month that he was singing better than ever as a result of his treatment, after doctors discovered he’d broken his neck without realising it.

The vocalist said: “I’ve been damn near on pitch-wise. My stamina’s a lot better. It’s like I’m really kind of filling in all these weird blanks.”

He’d previously admitted that he went back onstage too soon after the operation.

Slipknot complete their current touring schedule in Japan next month.

"Welcome to a dream come true!" – The story of Slipknot so far