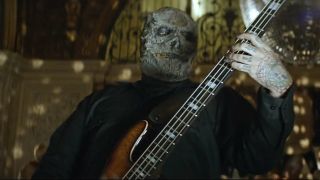 Corey Taylor has all but confirmed that the new Slipknot bassist is Allessando ‘Vman’ Venturella of Krokodil.

He admits he got upset when he realised the musician’s tattoos gave away his identity in the video for The Devil In I.

And he’s revealed that neither Venturella, nor the new drummer – thought to be Jay Weinberg after an online rant by ex-bandmate Laura Jane Grace – are full-time Slipknot members at the moment.

Taylor tells the incidentally-named LA show Corey Taylor Talks: “Somebody already pointing out the tattoos. I was like, ‘Why didn’t we make him wear gloves?’ I was so upset.

“We thought of all this stuff – we put the hood on him and then the mask, and he was like, ‘It’s really hot, guys.’ Then there’s his tattoos for everybody. We missed the mark on that one.”

He says of Venturella and his fellow newbie: “They’re not official band members yet, but they’re people who play with the band. Time will tell whether or not they’re full members. So far they’re doing really well and we’re enjoying jamming with them.”

Taylor recently told Metal Hammer that Slipknot had no intention of revealing the new mens’ names “unless we absolutely have to.” He added that he’d “loved the way” Lamb Of God drummer Chris Adler played up the incorrect rumour that he’d played on upcoming album .5: The Gray Chapter.

Venturella’s band Krokodil launch their debut album in November. Slipknot are the cover stars of the current edition of Metal Hammer, on sale now.