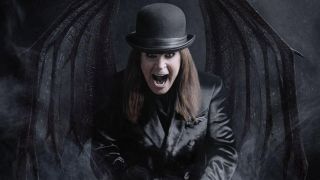 Sharon Osbourne says Ozzy is staring work on the follow-up to this year’s Ordinary Man and has hooked up once again with Andrew Watt for the project.

It was reported earlier this year that Ozzy Osbourne was planning to start work on a new album as soon as he could – now his wife and manager Sharon says, “You can't stop him. He's doing it.”

She also spoke about Ozzy’s health after the Black Sabbath icon fell at home last year, aggravating an old injury he sustained during his 2003 ATV accident which in turn exacerbated his Parkinson’s disease.

Sharon says: “He's doing really good. He had a terrible injury and at one point, they thought he would never walk again, but he is. He’s walking and doing great. He's been hit by so much medically, but he's doing good. He's getting stronger every day.

“To be hit with the spinal injury, and then what it had done was, it started off the Parkinson’s that he had the gene for but was never activated. He just had the gene.

“It's like having the breast cancer gene but it never comes into fruition. He had the Parkinson's gene and this accident just sparked it off. So he had a double dose of everything. But he's doing good.”

As for touring again, Sharon reports: “Ozzy says that as far as performing goes, he has to end it his way because it was his farewell tour he was on, but he still had a year to do of that tour, but the accident stopped it all.

“He said it's not going to end just like that. He’s going to go back out, and even if it's just one huge show to say goodbye, he's going to do it.”

Ozzy was due to kick off his rescheduled No More Tours 2 shows in Atlanta back in May, but the dates were postponed to allow the singer to seek medical treatment in Switzerland. However, his trip was put on hold due to the pandemic.