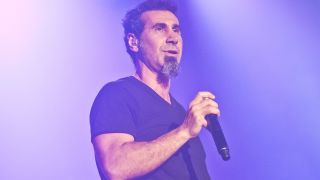 Serj Tankian says he’s planning on releasing a rock EP that was originally intended to be a System Of A Down project.

While the band have continued to tour, they haven’t released new material since 2005’s Mezmerize and Hypnotize albums – although Tankian recently hooked up with SOAD drummer John Dolmayan for a cover of David Bowie’s Starman.

And in a new interview with Spin, Tankian has given more info on the EP – and its musical direction.

Tankian says: “Originally I had these songs in mind for a System record if we were to end up doing a System record. But as we could not really see eye to eye on how to go forward with that, I decided to finish them off myself and release them as an EP."

Asked if new material from System Of A Down was possible any time soon, Tankian replies: “I don’t know. It hasn’t happened. But I’ll never say never.”

As for the musical direction of the EP, Tankian says: “It’s got stuff that’s really heavy and there’s a funny aspect, and then there’s a song about my son. It kind of runs the gauntlet on diversity of thematic expression: political, non-political.

“I guess that’s always been me, all over the place. I think I’m gonna call it Elasticity just because I wanted to do it with System and it didn’t happen."

Speaking previously about the lack of new System Of A Down material, Dolmayan said “I don’t know if new album will ever happen” while bassist Shavo Odadjian spoke out about the situation, reporting the band had a stockpile of material that could make it on to an album and commenting that he "didn't join a band to stop playing music".

Meanwhile, guitarist Daron Malakian said it’s “not likely” that a new album from the band will happen anytime soon, with some of the material he originally composed for SOAD ending up on his side-project Scars On Broadway's album Dictator in 2018.