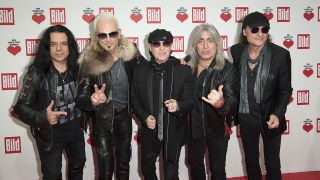 Scorpions frontman Klaus Meine has spoken exclusively with Classic Rock about how work on their new studio album is progressing.

The band have been working on the follow-up to 2015’s Return To Forever, despite being in lockdown, with Meine saying that he and guitarists Rudolf Schenker and Matthias Jabs have been recording what they can despite the difficult situation.

Meine says: “Our plan for this year was to concentrate on recording the new album. We were supposed to be in Los Angeles with producer Greg Fidelman working on this during May and June.

“Then, we'd have gone to Las Vegas for our residency at the Zappos Theater, before going back LA in August to finish the album. But the pandemic put paid to all of that.

“Right now, Rudolf Schenker, Matthias Jabs and I get together every day at the Peppermint Park Studios in Hannover. We’re recording what we can for the album.

“Greg joins us on Zoom, but we are almost at the point where we need to have drummer Mikkey Dee and bassist Pawel Maciwoda with us, and also for Greg to be in the studio.

“But Mikkey is in Sweden, Pawel is in Poland and Greg's in the States. With things as they are, none of them can fly in so, we are a bit stuck.

“The good thing is that we are under no time pressure to finish this album. So, we are relaxed about the situation. We'll take as long as we need to, and make the strongest album we can.”

Meine adds: “We are luckier than a lot of bands, because aside from the Vegas residency, there were no other shows booked for 2020. So, we've not faced the nightmare of having to postpone and rebook loads of dates. The Vegas shows have been moved to 2021, and we are now looking at what is possible live for next year.

“We've headlined UK festivals over the last three years – Ramblin' Man Fair, Stone Free and Bloodstock – and loved them all. But a lot of fans have been asking us to do a proper tour.

"We are very keen to do this if it's possible, and are checking out how that can work in our schedule.”

In April, Scorpions released a surprise new single titled Sign Of Hope, with the band checking in to say: “We are working on lot’s of hard'n'heavy rockers for our new album these days.

“Because of the dramatic COVID-19 pandemic, we want to give you a little Sign Of Hope that came straight from the heart in troubled times. Stay healthy and safe. We love you."