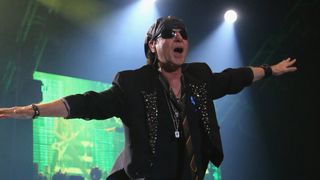 The DVD and Blu-ray release of Scorpions documentary Forever And A Day will come bundled with a disc featuring their ‘final’ show from 2012, it’s been confirmed.

The film charts the German band’s 2011-2012 Final Sting tour and recounts their 50-year career. The run of concerts were meant to be the band’s farewell, but the German outfit changed their mind and returned to the live arena soon after.

The Katja Von Garnier-directed film was shown in select cinemas across the US late last year and follows Scorpions “around the globe whilst both past and present band members and other key people who have worked with them across their career tell how the band started, got their early chances and then broke through to international stardom.”

It’ll be released on September 30 via Eagle Rock Entertainment on 2DVD and double Blu-ray. The extra disc will feature what was billed as Scorpions’ last-ever concert at the Olympiahalle, in Munich, on December 17, 2012 in full.

A video of their performance of Loving You Sunday Morning from the show can be watched below.

Earlier this year, Scorpions played a run of shows across the US with former Motorhead drummer Mikkey Dee. They’ll head back out on tour in November for a handful of German shows.