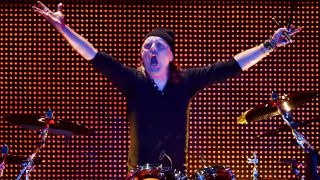 Metallica get straight to the point on their upcoming album Hardwired… To Self Destruct, according to Lars Ulrich.

The drummer recently said he took inspiration from 1983 record Kill ‘Em All on the follow-up to 2008’s Death Magnetic – adding that the new material is “a little more physical” and “more linear” than its “cerebral” predecessor.

Ulrich tells Star Tribune: “I’m pretty sure it sounds like Metallica. The songs are probably a little leaner and shorter than the last go-around, and slightly less progressive.

“They’re more one-dimensional, meaning each song really just has one individual mood instead of having many moods within one song. And I can tell you, it feels pretty damn good to have this new music and to be getting it out there.”

Hardwired… To Self Destruct will be released on November 18 via their Blackened Records label. They debuted lead song Hardwired live in Minneapolis last weekend and also performed Battery at the show.

The band said they plan to tour the US extensively in support of the album next year – marking the first time since 2009 that they’ll have carried out serious touring duties in the area.

Instant downloads of the song Hardwired are available with pre-orders of the album via Metallica.com.

What does the new Metallica song say about their new album?