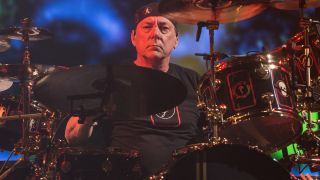 Neil Peart says while it’s difficult for musicians to make a living from playing, he urges up-and-coming artists to stick with it as “miracles do happen.”

The Rush drummer’s comments are featured in Pete Vassilopoulos’ upcoming book Recording Drummers (via Drum Magazine) in which Peart reflects on his career behind the kit – from his early days recording demos for J.R. Flood in Toronto, to selling out stadiums across the world with his Rush bandmates Geddy Lee and Alex Lifeson.

Peart says: “Times are tough for musicians starting out – but they clearly were for me in southern Ontario in the 1970s, too. Miracles do happen. Maybe you will be one.

“In any case, whether or not your music supports you, it can still nurture you. It is not given to every aspiring musician to make a living at it, never mind fame and fortune, but it can still be a rewarding lifetime pursuit.

“I know several ‘non-professional’ drummers who find joy in playing the instrument, sometimes with friends, and gradually getting better at it.”

Peart advises aspiring musicians to “practice, practice, practice” and urges them to play live as often as possible, and adds: “Nothing teaches you more about where the nexus lays between what makes you excited, as a player, and what excites an audience.

“If the ideal is to play music you like, and have other people like it too, then the definition of luck fits perfectly – where preparation meets opportunity.”

He continues: “You really cannot play too much, on your own, with a band, and onstage. As Picasso said, ‘Inspiration exists, but it has to find us working.’

“The more you are practicing your chosen art, the more likely you are to stumble upon inspiration in that work. It’s probably safe to say that more inspiration is stumbled upon than delivered from on high.

“One related bit of wisdom I have acquired, in music and in life, ‘Magic happens – but it often requires some planning.’ Determination, too.”

Last week, bassist and vocalist Lee said he’d “accepted” that Rush touring days are over, following their R40 US trip earlier this year.

Guitarist Lifeson said that was “okay” as they consider what to do after drummer Neil Peart accepted a description of himself as “retired”.