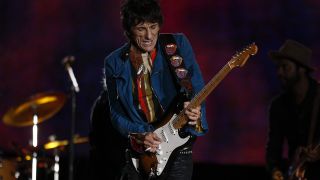 Ronnie Wood is to pay tribute to Chuck Berry with a new live album.

The Rolling Stones guitarist will release Ronnie Wood With His Wild Five – Mad Lad: A Live Tribute To Chuck Berry on November 15 through BMG.

It was recorded at Wimborne’s Tivoli Theatre in 2018 – a night that saw guest appearances from singer Imelda May and pianist Ben Waters.

Mad Lad will include Wood’s track Tribute To Chuck Berry and Worried Life Blues, which was written by Maceo Merriweather, with the album artwork hand-painted by Wood himself.

It’ll be available on CD, LP, a deluxe box set featuring the CD, LP and a 12 x 12 art card of the album artwork – and as a super deluxe limited edition box set, which will include everything from the deluxe box set along with a t-shirt and signed and numbered set list.

To mark the news, Wood has released a stream of Talking About You from the album, which can be listened to below.

Wood will also play with his band at London’s Shepherd’s Bush Empire on November 21.

Ronnie Wood: Mad Lad - A Live Tribute To Chuck Berry
Rolling Stone Ronnie Wood played a set at Wimborne’s Tivoli Theatre in 2018 as a tribute to Chuck Berry. The performance will be released on November 15. View Deal