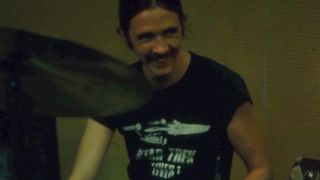 Rod de’Ath, the drummer who was an integral part of Rory Gallagher’s band in the 70s, has died at the age of 64, it has been reported.

Gallagher brought the Welshman into the band in 1972 following the departure of Wilgar Campbell, and appeared on five albums with the Irish bluesman: Blueprint, Tattoo, Irish Tour ’74, Against The Grain and Calling Card.

In a statement on his Facebook page, drummer Ted Mckenna, who took over from de’Ath in Gallagher’s band in 1978, says: “I got the sad news earlier today that Rod de’Ath had passed away. I only met him a couple of times when I worked with Rory, but was delighted to meet him again in 2012 when, for the first time, Rod, Brendan O’Neil and I, three of Rory’s drummers, had all been together. Unfortunately, it was for another sad occasion when we gathered to pay our respects to Lou Martin. My thoughts are with his family, friends and those who knew him well.”

After leaving Gallagher, de’Ath joined Ramrod with Martin and then played with the Downliners Sect before moving to the US.

On his return to the UK to produce an album for Road Erect, the drummer almost died in an accident in which he lost and eye, suffered severe brain damage and left him in a coma.

With no permanent address in the UK, hospital staff struggled to find out his identity. He regained consciousness and began the slow road to recovery but was forced to rebuild his life in London with his wife and daughter, as their home in the US had been ransacked during his long absence.

As a result of his time out of the public eye, many believed the drummer was dead and it was for this reason he refused to go to Gallagher’s funeral in 1995. However, at a memorial service to the Irish guitarist, de’Ath decided to pay his respects, shocking many at his sudden appearance.

de’Ath had been unwell for some time, undergoing major surgery in June this year. It is believed he passed away in his sleep.