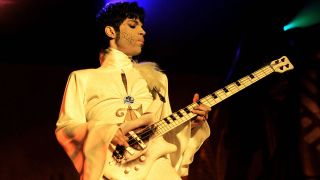 When you examine the similarities between Prince's audacious, innovative songwriting and the multilayered, joy-filled sounds coming from Southend-on-Sea quartet Asylums, it soon becomes clear why frontman and songwriter Luke Branch chose The Purple One as his muse.

To mark the announcement of their forthcoming album, Alien Human Emotions, Branch joins us to take us through the 10 defining moments of Prince's sprawling career. Be sure to check out the video for Asylums' new single, When We Wake Up, at the bottom of the page.

"Quite simply the work of a songwriting genius. It's so visual lyrically, so musical across the instrumentation. There are a few chords that don't feel like they belong, and I love that – the choice to challenge the listener a bit, to surprise and unsettle."

"A totally dangerous groove juxtaposed with an angry, feminine and cartoonified vocal. I really love it it when Prince is funny and when he screams 'Bullshit' on this song it makes me smile so much. Cool as fuck."

"What an amazing musician Prince was! He played everything on this track, including the amazing drum track. Even as a teenager, his pop arrangement skills were impeccable. The mood is lighter here and has a youthful optimism."

"Maybe my favourite set of lyrics ever, I've loved them for years and years. It has the feel of a funkier A Day In The Life by The Beatles. The groove is sublime, the space in the instrumentation is so ahead of its time. The line 'Some say a man ain't happy unless a man truly dies' sends a shiver down my spine."

"A dancefloor banger from The Black Album, it's Prince at his manic, funky and tortured best. The bit where he screams 'Yeaaaaahhhh' after the hook is so James Brown but it has something else I can't fully explain... A darkness."

"I love the lyrics on this track – it resonates with me even today. I can't think of another artist who could create a mood like this in a song more convincingly than Prince. It connected with me even as a kid. It's not alpha-male rock star stuff, it's sensitive, daring, and out of this world."

"This track has such a playful feel – is it important social commentary? Probably not. But the groove is so fun and infectious, it just puts a smile on my face. Fantastic vocals."

"I love the album Lovesexy that this track comes from; it's not perfect, but it's hopeful and you can feel that it was written after a very dark period. I Wish You Heaven is simple, sensitive and understated, but above all, beautifully melodic."

"This song makes me want to cry and dance at the same time. That's something that Prince could create better than anyone – sexy and melancholic. The horn line in this tune is beyond catchy."

"This song is so strange. It's like Sly & The Family Stone's song Family Affair in some ways, but with a surrealist 1980s backdrop. The story telling in the lyrics is priceless, and almost evokes a bit of Frank's Wild Years by Tom Waits."

Asylums' new album, Alien Human Emotions, will be released on July 6 via Cool Thing Records. Check out the video for single When We Wake Up below: