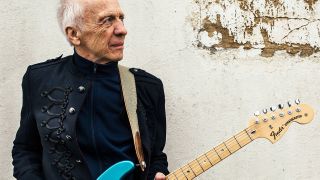 Robin Trower has announced a UK release date for his recent album Time And Emotion, the follow-up to last year’s Where Are You Going To. The album was released in the US last month, but gets a UK release from Manhaton Records on August 4.

“I can honestly say I don’t know when I have been happier with an album,” says Trower. “I feel Time and Emotion contains some of my very best work.”

“The whole thing is about how soulful can you make it, really,” Trower told bakersfield.com last month. “The tone of the guitar, the ‘voice’ if you like, is important. I’m a rock ’n’ roll guitar player but I’m always trying to make it as soulful as possible instead of exciting as possible.”

Trower will follow the album’s release with his only UK show of 2017 at London’s Islington Assembly Hall on November 29. Tickets are on sale now.

Buyer's Guide: How to buy the best of Robin Trower