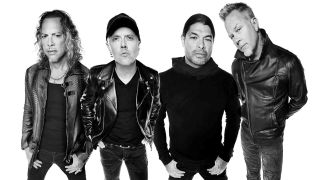 And while he accepts they can’t please everyone, he argues that it’s important that they’re still taking chances late into their career.

Metallica release 10th album Hardwired… To Self-Destruct on November 18. The follow-up to 2008’s Death Magnetic has been keyed up with the launch of well-received tracks Hardwired and Moth Into Flame.

Trujillo tells Punk Rock Politics: “My launch pad with Metallica was Death Magnetic – that was a collaborative experience for me with Lars and James. Then you get into the second phase of the journey. It is thrash, it is in your face.

“Our producer Greg Fidelman, who actually engineered Death Magnetic, I always thought would be great. No disrespect to Rick Rubin, because Rick was super-important in getting Lars and James to reconnect with the thrash roots.

“Having Rick guide them into that was super-important at the time. Then, over the years, learning the Black Album top to bottom and touring that, was really cool.

“Going through Ride The Lightning and even Kill ‘Em All – those challenges drive you crazy. They make you better.”

Trujillo believes those experiences have resulted in Hardwired… To Self-Destruct being a “frantic journey” and he adds: “I feel it’s tight – we’ve fallen into this groove as a rhythm section and as a band.”

However, the bassist is ready for a negative response from some quarters. “Fans will always have an opinion,” he says. “They’re always going to be like, ‘But I want this,’ or ‘I want that,’ or ‘Metallica sucks now.’ You get that all the time. You can’t win ‘em all.

“But the whole thing I find great about this band is, we take chances. We like to challenge ourselves. We’re doing the best we can, and hopefully still have relevant music in this day and age.

“There’s a lot of confusion out there. A lot of people are losing it to a certain degree. So I think this is appropriate – it’s therapeutic.

“Music is a release. It should be therapeutic. People can release whatever frustrations they have through listening to a Metallica song. That’s what it’s all about.”

The band have announced a number of live appearances in the coming months, with more to be added in due course.