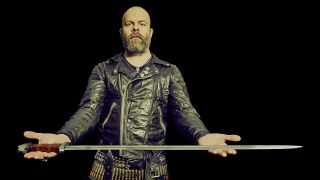 Few modern bands embody the spirit of heavy metal better than Sweden’s Grand Magus. As we anticipate the trio’s arrival on these shores with Amon Amarth and Testament, we managed to persuade frontman JB Christoffersson to put his broadsword away for a few minutes and tell us about his childhood conversion to the ways of metal and why touring with Orange Goblin is genuinely bad for your health…

“That’s easy. That was Black Sabbath, Paranoid. That was probably around the age of 11 or so. It was actually through my brother that I discovered Sabbath. I have two brothers that are a lot older than me, so they were listening to stuff like Nazareth and Alice Cooper and Deep Purple, so the name Black Sabbath was mentioned at some point. I was really into horror, so Black Sabbath sounded like something I should get. I bought Paranoid and got scared shitless listening to Iron Man. It was definitely life-changing. There’s just something about metal… I’d already heard Purple and stuff, but Black Sabbath was completely different and so heavy and ominous. That was really the start of my love for heavy metal.”

What was the first single you ever bought?

“The first single? Man… I think the first single I ever bought was a Swedish band. It was probably something as crazy as Monsters Of The Night by Heavy Load. I don’t have many singles. I think it was that one. It’s not very good, ha ha! That was the last thing they did, actually, so it was after the great stuff that they did. This must have been around… I don’t remember when it count. Maybe I was 15 or something. By then I’d already bought a shitload of albums, but for some reason I bought that one as a single. Singles have never really been my thing.”

What was the first gig you ever went to?

“That was probably Nazareth and Uriah Heep in my town of Falun. For some reason, it’s like a sports town, winter sports, so we have a big ice barn there. So they came up to this little town and played in the ice hockey arena. That must have been in ’83 or something. It was really cool. Uriah Heep are such a good band. All the eras have some awesome stuff.”

What was the first gig you ever played?

“That must have been during the pre-Grand Magus days. I think I actually played gigs in Uppsala when I was living there, but I don’t really remember, to be honest ha ha! It’s such a long time ago and I had a few attempts at bands before Grand Magus but they never amounted to anything. It must have been around the early ‘90s, maybe ’93 or something. For some reason, once I got into metal, I started playing guitar and I kept doing it. I never had any plan, it was just a compulsion… to the detriment of everyone around me! It was always just something I needed to do.”

What can you remember about the first Grand Magus tour?

“I have very strong memories from that tour. It was our first ever tour and we did it with Orange Goblin. It was absolute fucking madness from day one. It was six weeks of drinking, doing all kinds of fucking idiot things. The bus broke down on the first day. It was just madness. I think I was drunk for the whole thing. I remember that when I got home, my girlfriend looked at me and said ‘You’ve changed!’ She said I looked like a frog. I’ve never been a bodybuilder or anything but I used to be quite slim and fit, but after that tour I looked like a fucking homeless person ha ha. But it was fun as well! We weren’t very experienced and the Goblin boys were, so they really put us through the wringer, you know? They’re great guys.”

Grand Magus Talking About Manowar Is The Most Metal Thing Ever