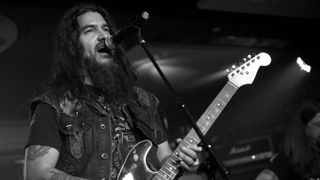 Robb Flynn has confirmed that the lyrics to new Machine Head track Is There Anybody Out There? were a response to Phil Anselmo’s ‘white power’ outburst.

Machine Head released the track last week and fans were quick to speculate that it was a reaction to Anselmo’s shameful on-stage rant at last year’s Dimebash event.

In the second part of a ‘making of’ video for the song, Flynn confirms he re-wrote the lyrics on the second verse of Is There Anybody Out There? after Anselmo’s outburst.

Flynn says: “I wasn’t feeling it, and so I wrote a whole new second verse about how fucking appalled I was that he did that.”

The lyrics in the second first read: “Now I stand as a father, to men with no honor. Ashamed of the racists I used to call brothers. Because no flag can mean bravery, when bloodied by slavery.”

Last month, Flynn was reunited with a guitar that was given to him by late Pantera guitarist Dimebag Darrell but stolen from his home six years ago.