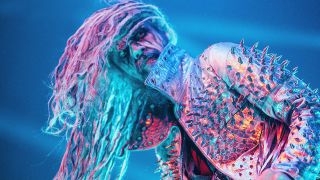 Rob Zombie is the guest editor of the brand new issue of Metal Hammer magazine.

Not only is he the cover star, but Zombie has also given an exclusive interview with the mag where he chats about his love of horror and his future plans, which includes his new film 3 From Hell and his next studio album.

Last year, Zombie narrated the documentary Charles Manson: The Final Words – a film all about the murderous cult leader who was behind a string of brutal killings in California in the late 60s.

And speaking about Manson, Zombie tells Metal Hammer: “As normal as my parents were, they never censored anything. My mom had Helter Skelter – the book on the Manson killings – and I remember looking at the pictures and just being fascinated by it.

“I was four when it happened and I’d see it and find it fascinating.”

Asked whether he mourned Manson’s death, Zombie replies: “No, of course not. But he was infinitely entertaining. I kind of miss him being around.

“Should he have been in prison? Of course. But nobody can deny he was entertaining. It’s kind of a bummer that there’s no more entertainment coming from that guy.”

The full interview can be found in new issue of Metal Hammer, which is in shops right now and is also crammed full of other gruesome Halloween treats.

Metallica axeman Kirk Hammett gives us his guide to the essential horror movies you have to see this Halloween, while Cradle Of Filth frontman Dani Filth interviews Doug "Pinhead" Bradley.

Get your copy right now!