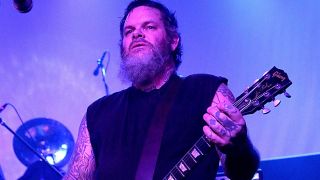 A further eight artists have been announced for next year’s Roadburn festival.

Kontinuum, Ecstatic Vision, Black Moon Circle, Kenn Nardi, Midnight and Jakob will hit the stage at the 013 venue in Tilburg, Netherlands, on April 14 to 17 next year.

Neurosis were revealed as one of the headline acts alongside Paradise Lost in August. And it’s also been announced that the band’s Scott Kelly and Steve Von Till will play separate solo sets on the 15th.

Amenra, The Skull, Green Carnation, La Muerte, Lychgate, Chaos Echos, :Of The Wand & The Moon and Der Blutharsch And The Infinite Church Of The Leading Hand were previously confirmed for the festival bill.

Grindcore pioneer Lee Dorrian, who will curate next year’s event said: “For many years I’ve felt like part of the family. So I was both shocked and excited when asked to take on this fantastic opportunity.”

“I promise to make this an event that no one will forget. I’m already frothing at the potential of possibilities available.”