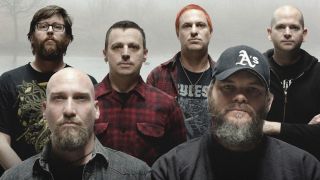 Neurosis and Paradise Lost have been named as headline acts for next year’s edition of the Roadburn Festival.

It takes place at the 013 venue in Tilburg, Netherlands, on April 14-17 – and grindcore pioneer Lee Dorrian will curate the 2016 edition.

Neurosis say: “To be invited to celebrate our 30th anniversary at Roadburn is an absolute honour. It’s a treasured and unique event that embodies the spirit of open-minded community and original, emotional heavy music.”

Confirming they’ll perform second album Gothic in full at the festival, Paradise Lost’s Nick Holmes says: “We spent a good deal of time in the early 90s driving around the Netherlands in a transit van, living off chips with mayonnaise, drinking Chocomel.

“Gothic totally reminds me of those days – so if we were ever going to play it, it has to be in the Netherlands, and where better than the Roadburn Festival?”

Dorrian adds: “For many years I’ve felt like part of the family. So I was both shocked and excited when asked to take on this fantastic opportunity. I promise to make this an event that no one will forget. I’m already frothing at the potential of possibilities available.”