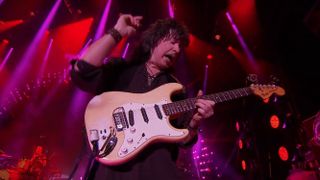 Rainbow’s performance at the Genting Arena in Birmingham from last June is to be released as a double album.

Titled Live In Birmingham 2016, it’ll be out on June 9 via Eagle Rock Entertainment.

The show was the band’s only performance in the UK in 2016 and preceded two dates at Germany’s Monsters Of Rock festival.

A statement from the label reads: “This new 2CD set captures the full audio from the British show at the Genting Arena at the NEC, Birmingham.

“The setlist for this show, combining classic tracks from both Deep Purple and Rainbow, includes two tracks from the Mark III Deep Purple era, Soldier Of Fortune and Burn that were not included in the German shows.”

Blackmore will bring the new-look Rainbow back to the UK this summer, with four dates planned in June.

The story of how Rainbow tried to conquer MTV, by those who were there