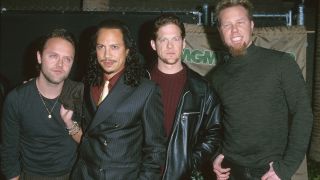 Metallica have travelled back to 1999 in the latest episode in their Metallica Mondays series.

The band have showcased their performance from Parque Simón Bolívar in Bogota, Colombia, which took place on May 2 that year – less than two weeks after they filmed their landmark S&M show.

It was the second stop on the Latin American leg of their Garage Remains The Same Tour – and was another key moment in the band’s history as it marked the first time they had ever played in the country.

“We have been back many times since and it’s always great and we always feel at home, but this was the very first time, 21 years ago.”

As for the setlist, which he took care not to spoil, Ulrich added: “There are definitely a couple of unique and rarely played songs in here – this should be fun!”

Metallica have been hand-picking some of their favourite performances from down through the years to keep fans entertained during the lockdown – and last night’s broadcast was the 15th.

Metallica Mondays are streamed on both the band’s YouTube channel and Facebook page at 8pm ET (1am BST), with fans able to donate cash live to Metallica’s All Within My Hands foundation during the stream.