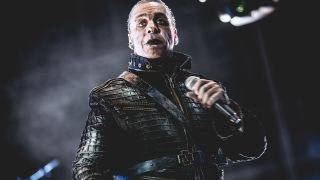 Rammstein frontman Till Lindemann has been accused of assaulting a man at a German hotel bar.

It’s said to have begun after a 54-year-old man insulted Lindemann and his female friend, with the unnamed man allegedly calling her a sex worker and saying: “I would pay double for you.”

Bild report (via NME) that Lindemann, 56, then asked the man to apologise which he refused to do and instead clenched his fists and asked the Rammstein frontman to walk away. It’s alleged that at this point, Lindemann elbowed the man in the face – leaving him with a bloody nose.

Police were called to the hotel in the early hours of the morning and confirmed that an incident took place between a 54-year-old man from Hamburg and a 56-year-old man from Berlin. They are now investigating but gave no further details.

Rammstein will play at Dresden’s Rudolf-Harbig-Stadion later tonight (June 13) as part of their European tour in support of their new studio album.