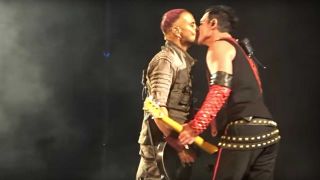 The move, made in defiance of Russia's anti-LGBTQ laws, was celebrated by Rammstein in an Instagram post headlined "Russia, We Love You!".

Russia's "gay propaganda" law was passed in 2003 by President Vladimir Putin. Its stated aim is to prevent children from being exposed to homosexuality by making it illegal to present any homosexual act as normal.

Under the law, foreigners can be arrested and detained for up to 15 days or fined up to 5,000 rubles, then deported.

A week ago at the Stadion Śląski, Chorzów, in Poland, drummer Christoph Schneider was ferried across the crowd in a rubber dinghy while waving a Pride flag in support of the Poland's LGBTQ community, who had faced violent attacks during Pride Month.

Rammstein are currently touring to support their seventh, self-titled album.

Last month the band announced a European stadium tour for 2020. They have since announced UK shows in Coventry and Cardiff.