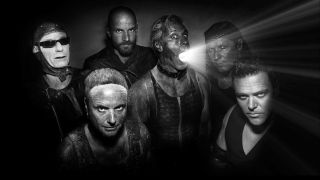 Rammstein have checked in from the studio to update fans on how their new album is progressing.

It was previously reported that the German heavyweights were looking to launch the highly anticipated follow-up to 2009’s Liebe ist für alle da in April – and it appears they’re on course to do so.

In a new post on Twitter, the band shared several black and white shots from the studio, saying: “Getting closer! Finalising the mix for the new album in Santa Monica, California.”

Last week, Rammstein guitarists Richard Kruspe and Paul Landers spoke with Guitar World about the direction of the new album.

Kruspe said: “If you listen to the record there are still Rammstein elements in there. It’s still us. But we experimented a lot with certain kinds of harmony through the verses and a lot of melodic structures in the songs.

“I feel like we came up with great stuff that I wouldn’t have dreamed before could be Rammstein.”

Landers added: "It’s not too sterile, not too clean – it has a lot of life and energy in it, but it’s not all angry. The music is more than that. It’s different for Rammstein. You might even say it’s fun to listen to.”

Getting closer! Finalizing the mix for the new album in Santa Monica, CA.#Rammstein pic.twitter.com/A7m60BQ6f1January 22, 2019