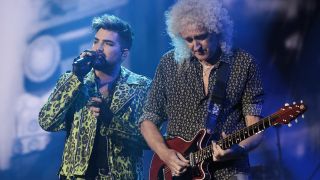 Queen and Adam Lambert thrilled fans at the Fire Fight Australia concert over the weekend by recreating the band’s Live Aid set from 1985.

The concert took place at the city’s ANZ Stadium on Sunday in front to 50,000 people, with Queen and Lambert kicking off with the classic Bohemian Rhapsody.

That was followed by Radio Gaga, Hammer To Fall, Crazy Little Thing Called Love, We Will Rock You and We Are The Champions.

There was also a back screen projection of Freddie Mercury performing his famous ‘Ay-Oh’ which the crowd followed impeccably.

Following the performance, guitarist Brian May posted on Instagram: “Fire Fight Australia tonight. Awesome. I don’t think I’ve felt quite like that since Live Aid.”

Live footage from the show can be watched below.

Alice Cooper also performed at the show, and played a four-song set featuring Department Of Youth, I’m Eighteen, Poison and School’s Out – with May also posting a picture of the two of them backstage.

The Fire Fight Australia show raised funds for national bushfire relief efforts, as the country reels from devastating fires that have swept across large parts of Australia since September last year.

Donations are still being taken through the official festival website.

Catching up with an old friend backstage at ANZ Stadium Fire Fight Australia. Alice is way beyond cool ! Bri Brian Harold May