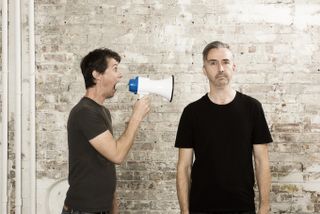 London-based progressive rock duo Quantum Pig have streamed their debut single Citizen And State, which you can listen to below. The pair, Ian Faragher and Mark Stevenson, have recently signed to White Star Records, the label set up by Lonely Robot's John Mitchell and Magick Eye Records owner Chris Hillman.

“It’s the perfect home for us. We’ve been huge fans of John Mitchell’s work for years, whether that’s as a songwriter, musician or producer. We couldn’t have found a better fit in terms of our intentions for the band going forward," Faragher told Prog.

“White Star allow us the freedom to explore any avenue whilst simultaneously plugging us into the heart of the prog. They’re also lovely people to boot. It’s the best of all possible worlds," adds Stevenson.

Quantum Pig's debut single, Citizen And State, which features drummer Craig Blundell, is released tomorrow, and is described as "a meeting between The Stranglers and Kraftwerk."

"When we started working on Citizen And State I was immediately reminded of my favourite prog/punk crossover act The Stranglers, so there's something of the spirit of The Men In Black in here," says Stevenson. "But we can't resist a hook, so there's a chorus you can sing along to, which acts as a nice counterpoint to the philosophy and howling.”

Citizen And State is released through White Star Records tomorrow.