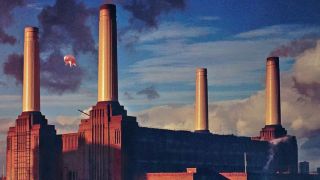 Pink Floyd’s unruly inflatable pig Algie is one of a number of rock-related props going up for auction next month.

Algie the pig was flown above London’s Battersea Power Station during a photo shoot for Floyd album Animals in 1977. It broke free in high winds and led to flights being cancelled at the city’s Heathrow airport. It was later found in a field in Kent, and eventually returned to creator Rob Harries.

He also made a giant pig’s head for Roger Waters’ Berlin Wall concert, as well as work for AC/DC and Iron Maiden, and the Babylonian woman from the Rolling Stones’ stage set.

Harries tells the BBC: “I’m sad to see them go but they very rarely see the light of day, so I’d be quite happy for someone else to take them for a walk.

“The clear-out has been quite cathartic and brought back a lot of memories, but I do feel I’ve been there and done that now, and it’s time to move on.”

The items go under the hammer via an online sale hosted by Suffolk-based Durrants on September 15. Pink Floyd are featured in the latest edition of Classic Rock, on sale now in print, digital and via TeamRock+.