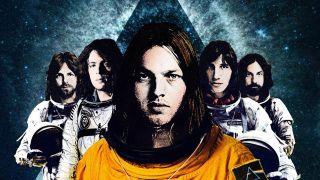 Set the controls for the heart of the sun with our interstellar 32-page celebration of the original space-rock band.

The Progressive Years Release the cows! Floyd ramp up the experimentalism.

Dark Side Of The Moon How their biggest album started with an on-stage bust-up.

Wish You Were Here Flaming stuntmen, a surprise appearance from an old friend… and the beginning of the end for the band.

Caught On Camera Legendary photographer Jill Furmanovsky delves into her archives to bring you her personal selection of Pink Floyd shots.

Behind The Wall Dismantling Floyd’s magnum opus, brick by brick.

Gilmour Versus Waters How intractable tensions led to a 20-year power struggle – and a pair of giant inflatable testicles.

**Europe **The days of heading to Venus are behind them. In 2015, Joey Tempest is bringing The Final Countdown to the Middle East.

The Decline Of Western Civilization Part II Inside the infamous Sunset Strip documentary, by the people who made it. Warning: includes hot tubs and strippers.

Alabama Shakes The most exciting new singer around? AC/DC-loving rock’n’soul barnstormer Brittany Howard could be it.

**What’s on your free CD? **Interstellar Overdrive: set the controls for the heart of the sun, here’s 15 of the best new tripmasters, dug deep from the psychedelic underground by our very own Sleazegrinder. Including The Cuckoos, Statue Thieves, Occult Wisdom, Doctor Doom, Marble Pawns, Cybernetic Witch Cult and more…

The Dirt Inside the new Led Zeppelin photo exhibition… Ritchie Blackmore to hang up his lute and return to rock… Yes ponder their future after the death of Chris Squire… say hello to The Bohicas and Wilson… welcome back Slayer, Backyard Babies and punk reprobates Chelsea… bid adieu to ex-Spider From Mars Dave Black and wizardly songwriter Eddie Hardin…

Raw Power McIntosh, the people who powered the 1969 Woodstock festival, make their first entry into the headphones market.

The Stories Behind The Songs: 10cc Inspired by a fantasy air hostess, I’m Mandy Fly Me was the song that launched a thousand intra-band arguments.

Q&A: Denis Leary The motormouthed comedian-turned-small-screen rock star on why he should be the next singer in Led Zeppelin.

Live Previews Must-see gigs from King Crimson, Rich Robinson and FFS. Plus full gig listings – who’s playing where and when.

Heavy Load: Phil May The Pretty Things singer has survived verbal abuse, lung disease and being in a band with a man in yellow loon pants

Instantly read the articles from issue 214 of and dive into the back issues right now on TeamRock+.

Get a copy of Classic Rock 214 delivered to your door.