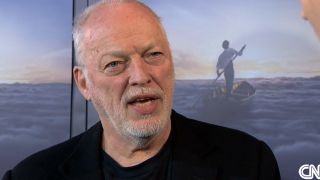 The Endless River, Floyd’s final album, is out now, and they’ve just released a video for Louder Than Words – the only track to feature lead vocals.

The launch achieved record pre-order sales via Amazon, topping totals from One Direction, Robbie Williams, Take That and Susan Boyle.

Asked why he thinks that happened, Gilmour tells CNN: “God, I’m going to sound like a grumpy old man. Modern music, to me, is very formulaic.

“My children, who are now in their late teens and in their twenties, all went through phases of thinking the Beatles were the greatest thing on the planet. There are an awful lot of young people who are searching back through older music for something real, or more original.

“Maybe they’re looking for something they’re not getting; something that’s not made quite so robotically.”

But he accepts that some modern music doesn’t match his description, adding: “I’m not delving into the whole of the world’s music as much as I would have done when I was a younger person.”

Gilmour last month said there was no room in his future for Floyd because he was aiming to focus on solo work – while drummer Nick Mason all but ruled out the chances of touring on the back of The Endless River, saying: “It would be fun to play live, but it doesn’t actually lend itself to a proper tour.”