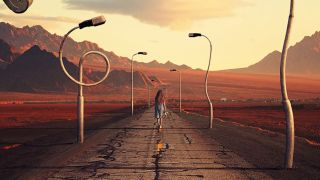 Now, UK tech studio Draw & Code have developed an augmented reality experience which gets fans up close and personal with a selection of Pink Floyd artwork.

Visiting The Later Years Web AR Experience site using a mobile device allows you to choose images from albums including A Momentary Lapse Of Reason, The Division Bell and Pulse.

Then, point the camera somewhere in your home or out in the open air, tap the screen and experience some iconic Floyd images which you can then walk around and examine closely. You can even take screenshots and share them on social media using the hashtag #TheLaterYears. Each piece of art is accompanied by music from the selected album.

To accompany the release of The Later Years, guitarist and vocalist David Gilmour launched a four-part podcast titled The Lost Art Of Conversation, which saw him discussing the band in the late 80s, delving into the band’s creative output, chatting about the ideas behind their striking artwork and reflecting on their epic live performances.

Speaking about Floyd’s 1987 return for A Momentary Lapse Of Reason, Gilmour said: “It’s quite a big thing to carry on Pink Floyd with Roger Waters having gone. He is a big, big part of it obviously, a major talent and our primary lyricist, so it was difficult.”

He adds: “I was so glad to have Rick Wright there with his ideas and playing the way he did. And Nick Mason is the perfect drummer for Pink Floyd. It all felt so right on those sessions.”

Pink Floyd: The Later Years
This collection brings together Pink Floyd's work from 1987 onwards and features the band's studio albums, along with live cuts, previously unreleased tracks and more.View Deal