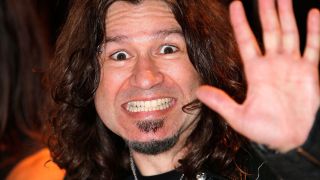 Phil X says he can’t be himself when playing with Bon Jovi – and adds that he doesn’t even try to be like the man he replaced.

The guitarist – full name Philip Xenedis – stepped in for Richie Sambora in 2011 and again in 2013 when Sambora walked away for personal reasons. While he’s loved every minute with Bon Jovi so far, Xenedis says he can’t really be himself unless he’s performing with his own band, The Drills.

Discussing his involvement in the upcoming film Hired Gun, Xenedis tells The Double Stop Podcast: “When you’re a hired gun, your level of creative input is limited. Even when I toured with Bon Jovi, I couldn’t be Richie, because I’m not. But I couldn’t really be me, so I became this guy in the middle somewhere who was between the two.

“When I did the first 13 shows with Bon Jovi in 2011, on Sunday night I played in St Louis, it was the last show. Jon asked me to sing the last verse of Wanted Dead Or Alive and it was in front of 20,000 people. When I came home on Friday, I played at The Roxy with The Drills. And to me it was as exciting – 200 people, my songs, doing my thing, with people in the front freaking out.”

Hired Gun puts backing musicians in the spotlight and features interviews with famous unsung heroes including John 5, Dave Ellefson, Nita Strauss and Rudy Sarzo, among others.

Ellefson worked with various bands during his time away from Megadeth between 2002 and 2010 and says it taught him how to be a better musician.

On his involvement with the documentary, Ellefson says: “I loved the concept of it, because our world is so full of what I would call the unsung heroes who make great artists even greater because of their contributions.

“There was a period when I was away from Megadeth when I played with Ronnie Montrose and did some work with Soulfly, recording and touring. I got to have these hired gun opportunities that seriously sharpened my skills and brought music and abilities out of me that I knew were there, but being in one band for 20 years I never got to let them out.”

Rudy Sarzo has a rich history as a ‘hired gun’ having played bass with Geoff Tate’s Queensryche, Ozzy Osbourne, Whitesnake and Dio. He says the best hired hands are those who do their homework.

Sarzo adds: “You can’t take the gig just because it’s a paying gig. You’re gonna have to play those songs and live with those people. It’s a family, do you wanna go on the road and be on a bus with these guys. It’s a very complex thing.

“If you want to be the best contributor to the gig that you can, always look at the legacy of the band. Check out their original recordings, because those were the filtered ideas working with producers, engineers. Then listen to the live versions of those songs because they do evolve. Then by the time you join the band you’re very educated about who and what you’re playing.”