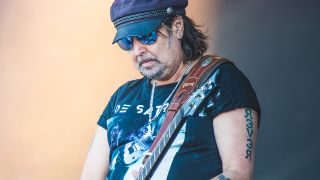 Phil Campbell has released a lyric video for his new single Swing It, which features guest vocals from Alice Cooper.

It’s the latest track to be taken from the former Motorhead guitarist’s upcoming solo album Old Lions Still Roar, which will launch on October 25 via Nuclear Blast.

Speaking about the project, Campbell said: “I’ve been threatening to do this album since at least 1999.

“I wrote a bunch of songs and when it started to take shape, I asked some friends and acquaintances and people I’ve admired for years if they wanted to do it.

Meanwhile, Phil Campbell And The Bastard Sons are currently on tour across Europe in support of their 2018 record The Age Of Absurdity.