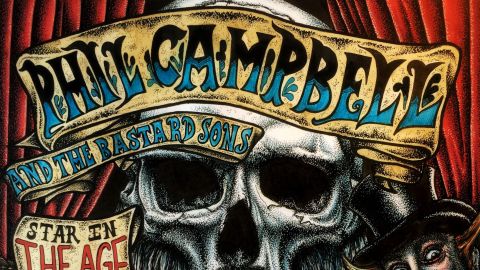 Likely acting as some sort of catharsis to the pain of loss and grief, in retrospect, Phil Campbell’s strategy of focusing his energies into this family-filled project has proved both a bold and brave move: some icons’ shoes can never be refilled

Campbell’s three sons – Todd, Dane and Tyla (also a member of the criminally underrated The People The Poet) – are an exceptionally talented trio of Welsh bearded bastards, and the family DNA knits everything together as much as the dynamics of the musical interplay. It’s tight. Very tight.

Eschewing the grittier and scuzzier elements of Motörhead’s aesthetic for a far cleaner, punchier approach, the energy is high and there’s a rich seam of enjoyment. Think classic rock with a metal production (pinpoint-perfect guitar tones, a snare sound to die for) and a shitload of swagger and you’ve got a layman’s review that’s actually not too far off the mark.

Throughout, the riffs are superior and archetypal, and Campbell senior’s lead work shines, with a deft fizz and rejuvenated spirit that’s best illustrated on album closer Into The Dark and the standout Dark Days. A Deep South (Pontypridd?) gothic blues workout, the space it affords reveals the band’s strength and depth.

Album opener Ringleader is another highlight – a ripsnorter nodding furiously to Metallica, AC/DC and Motörhead’s Bomber as it speeds by. Similarly, there’s the infectious and anthemic Get On Your Knees; an instant classic possibly marred by some ambiguous lyrics that hopefully point towards first-person narrative misanthropy rather than actual misogyny.

All in, it’s superior stuff, brimming with self-effacement and fun that belies the quality and seriousness from which it’s constructed. Decent family values in anyone’s book.