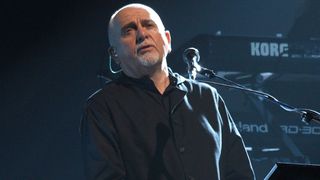 Peter Gabriel has released a stream of his track The Veil.

The former Genesis man wrote the song specifically for the upcoming Oliver Stone-directed film Snowden based on the experiences of Edward Snowden, the computer professional who leaked classified information from the US’s National Security Agency in 2013. Listen to it below.

Gabriel says of the track: “As we become so visible in the digital world and leave an endless trail of data behind us, exactly who has our data and what they do with it becomes increasingly important.

“Snowden’s revelations shocked the world and made it very clear why we need to have some way to look over those who look over us. With increasing terrorist attacks, security is critical, but not without any accountability or oversight.”

He continues: “I was very happy to learn Oliver Stone had decided to make a film about Edward Snowden and believe this is a powerful and inspiring film.

“Oliver takes his music very seriously and I have always enjoyed collaborating with him and music supervisor Budd Carr.”

Snowden will be released in cinemas across the US from September 16, with a European date still to be confirmed. Watch a trailer below.

Earlier this year, Gabriel released remasters of his albums So, Us and Up which were reissued at half-speed 45 RPM to “deliver the maximum sound range.”