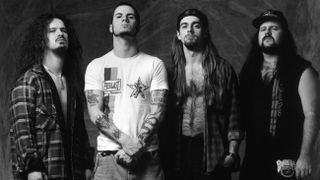 Former Pantera bassist Rex Brown says the band’s use of the Confederate flag is his one regret from his time with the band.

Pantera included the controversial flag on the rear of their 1996 album The Great Southern Trendkill and also displayed it as part of their live stage displays.

The flag was at the centre of widespread debate in the US last year for its historic links with proponents of oppression and racism. Pantera frontman Phil Anselmo said he would not have used the flag in connection with the band if he could turn back the clock.

And in a new interview with Rolling Stone to promote Joe Giron’s upcoming photo book A Vulgar Display Of Pantera, Brown says: “The Confederate flag is on the back cover of The Great Southern Trendkill. That was the ‘Southern’ part of it.

“There were still states that had that on their state flags. Nowadays it’s forbidden to use it. It’s not so politically correct. But it had nothing to do with racism. None of us were like that.

“It was just a tie-in to the artwork on the back cover. Lynyrd Skynyrd used one for years and still do. Now people confuse it with racism and hatred. That’s not what this band is about at all, quite the opposite.

But it’s the only thing I would say in the ‘PC’ days that I have any regrets about.”

Anselmo insists Pantera’s use of the flag was entirely innocent.

“We weren’t confessing to any clandestine power of structure or however you assholes wanna put it these days. I think we used the Confederate flag merely because of Lynyrd Skynyrd. We had learned from people before us. And it was never about anything other than that.”

Anselmo found himself in hot water earlier this yeear when he made a Nazi salute on stage and shouted “white power” at an event in memory of late Pantera guitarist Dimebag Darrell.

He initially played down the incident, but later begged for forgiveness.