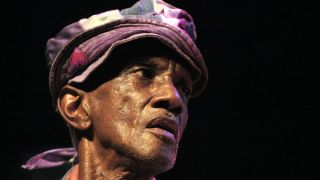 Keyboard icon Bernie Worrell has died at the age of 72.

The Parliament-Funkadelic star – who also worked with Talking Heads – passed away on Friday after a battle with cancer.

In a Facebook post, Worrell’s wife Judie confirmed the death. She says: “Bernie transitioned Home to The Great Spirit. Rest in peace, my love – you definitely made the world a better place.”

P-Funk pioneer Worrell revealed earlier this year that he was fighting lung cancer and his wife set up a fundraising page to help pay for his medical bills.

Parliament-Funkadelic leader George Clinton says: “This is a huge loss. The world of music will never be the same. Bernie’s influence and contribution – not just to funk but also rock and hip hop – will forever be felt.

“Bernie was a close and personal friend and this is a time of sadness for me personally. P-Funk stands with his family and fans alike in mourning this loss. The world is a little bit darker and a little less funky without Bernie in it.”

Worrell – known as the Wizard Of Woo – was one of 15 Parliament-Funkadelic members inducted into the Rock And Roll Hall Of Fame in 1997.

He was born in New Jersey in 1944 and studied at the Juilliard School in New York before meeting Clinton and forming Parliament-Funkadelic, who released debut album Funkadelic in 1970.

As well as his work with Parliament-Funkadelic and Talking Heads, Worrell collaborated with Jack Bruce, Mos Def, Fela Kuti, Ginger Baker and others. He joined forces with Les Claypool in a group called Colonel Claypool’s Bucket of Bernie Brains.

Primus frontman Claypool paid tribute, saying: “One of the greatest joys and monumental pleasures of my musical experience on this planet has been my interaction with the great Bernie Worrell.

“As time passes and the music historians and geeks dig deep, we will all become more enlightened on just what a huge contribution Bernie gave to the soundscape of the past four decades.

“It was an honour to play and create with him. He was the most fluid and expressive musician I’ve ever known. Every note and phrase was gracefully laden with the weight and depth of a man who had experienced a full and unique life.

“We’ve lost a truly wondrous and magical man of music.”