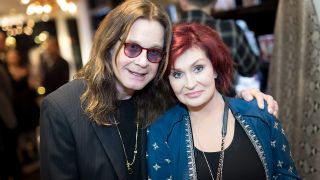 Ozzy Osbourne says he wouldn’t be alive now if it wasn’t for his wife and manager Sharon.

Ozzy was speaking to in a new Q&A provided by his US PR about his upcoming solo box set See You On The Other Side when he was asked if he ever thought he would be where he is today when first starting out in the music business.

Ozzy replies: “Absolutely! I knew, I thought, 'Oh, this will do!' When the first Black Sabbath album got in the charts, it was the first time I ever got success.

“I figured it would end, but we were picked up by various magazines and I thought, 'This will be good for a few years. Partying every night, women, and wine and rock'n'roll.'

“Here we are, 50 years up the road. I know that without a shadow of a doubt though, if it wasn't for my wife Sharon, I wouldn't be here now. I wouldn't be alive.

Reflecting on his early days with Sharon, Ozzy adds: “When we started off, I can remember, we were both broke, no credit cards, nothing. We'd have all the cash from the gig in a briefcase and we'd have to stay in these really cheap hotels."

Ozzy adds: “The briefcase with cash in it was handcuffed to my wrist because if we got ripped off, we were done. But it was fun because we had nothing to lose, and everything to gain! We'd beg, borrow, and steal.”

Ozzy will release his See You On The Other Side vinyl box set on November 29 through Sony Legacy – and the vocalist says he’s “really pleased” with the way it’s turned out.

He adds: “It's got everything in there that you could possibly want – and there's some surprises along the way. I think it's very well thought out and well put together.

“When Blizzard Of Ozz came out, it was all about vinyl. That's what nearly everyone bought. You know what I miss about out vinyl? You used to get a double sleeve album and it was a big deal.

“When CDs first came out I thought, ’It shrinks the size!’ You can't put as much artwork or information on a little sleeve which ruined a part of the experience for me. I don't care what people say, it's a totally different sound on vinyl."