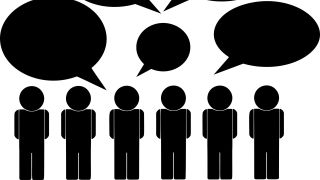 It’s the last night of your favourite band’s UK tour at a well-known London basement venue, renowned for its intimacy. You elect to stand nearer the back this time to absorb the wonder of both the performance and the sound. Then annoyingly, your live experience is completely banjaxed by a loud, persistent conversation behind you that seems to follow you wherever you move.

The thorny subject of chatter during gigs is probably now the pet peeve among my immediate circle of prog-loving friends, along with the infernal mobile phone filming. It’s not exactly rocket science. We pay good money, often take time off work and/or travel considerable distances to see the bands we love. So to listen involuntarily to private discussions about nothing in particular in our immediate environs or put up with a constant background drone of chatter isn’t part of the package we originally contributed to.

A classic example of misplaced conversation happened during a Fish show a few years ago when a key moment of Misplaced Childhood was interrupted by three female attendees having a full-on confab about mascara. Seriously, ladies!

There’s nothing wrong with a bit of banter between fellow gig goers between numbers, hopefully expressing amazement and wonder at the brilliance of the show, and I’m absolutely sure that bands welcome such positive chat. But I really can’t think of anything more disheartening or disrespectful than for acts to observe a section of the audience paying no attention to what they’re doing, especially during the quieter, acoustic sections. Thankfully venues like the Robin 2 in Bilston display signs politely asking everyone to keep the noise down while the bands crank up the sound.

In a perfect world, bars and lounges such as those at the Leamington Assembly would be located in a separate break-out area where talking can take place unimpeded. However, most venues have an integrated bar at the side or back of the performance space to which most gig-goers migrate for a drink and a chat, oblivious that the thrum of their conversation can be heard right down the front.

The solution? I’ve seen examples of carefully targeted messages emblazoned on the back of T-shirts but who wants to wear those when there’s so much band merchandise to choose from? A polite word is probably the only way, but there’s no telling what the response might be and that could provoke even greater disturbance as a result.

Prog fans have a lot to say for themselves – as numerous online forums will testify. However, there’s a time and a place for words. For now, a little less conversation, please.