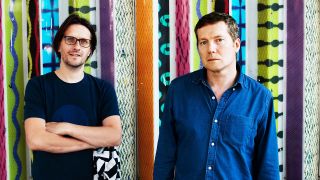 No-Man, the collaboration between Steven Wilson and Tim Bowness, will release their new album, Love You To Bits, through Caroline International on November 22.

The new album, the band's first for 11 years, centres around two 20-minute long connected pieces of music that incorporate electronica, ambient, pop and fusion in the band's most diverse release to date. You can hear a montage of the new music below.

Love You To Bits will be released on 12" vinyl, CD and download.