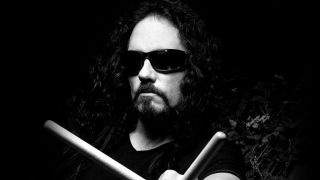 The co-author of Megalife: Nick Menza The Book says the late drummer was initially reluctant to write his memoir as he didn’t think his life was exciting enough.

J Marshall Craig is currently putting the finishing touches on the publication about the life of the former Megadeth sticksman, who died of natural causes in May while he was performing with his band Ohm. He was 51.

And the author reports that he, along with Menza’s family, eventually managed to persuade the drummer that he did have a story to tell.

Craig exclusively tells TeamRock: “Nick was very reluctant to do a memoir, as he believed he didn’t have an exciting-enough life to warrant an entire book.

“Finally, back in 2012, I convinced him that he had a great story to tell – and also, the mother of his children was a big fan of the book I wrote with Eric Burdon, Don’t Let Me Be Misunderstood, so she helped convince him that if anybody should write his story, it would be me.”

Craig and Menza had never met face-to-face, communicating over the years via phone calls and email. But once it was agreed the book would go ahead, the drummer invited Craig to his Studio City residence to put everything in motion.

Craig continues: “The book was written and rewritten in little bits here and there as there were times he simply didn’t want to talk about Megadeth, for instance. Our very last session was to be in the week of May 23 at my house. Tragically, of course, he died two nights before he was to fly here.”

A GoFundMe campaign was set up after the drummer’s death to financially support his two sons, while plans had started to hold a memorial concert, with the proceeds to be donated to his family. But last month, Megadeth leader Dave Mustaine said a tribute show might not happen if Menza’s family didn’t want it.

Megalife: Nick Menza The Book is expected to launch on November 4 and will be available via Menza’s website and through Quill And Quire Publishers.