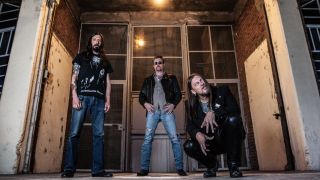 Metal Hammer is premiering the new full-length from psych sludgemonsters Nibiru ahead of its release next week.

Speaking to Metal Hammer about the new album, drummer/guitarist Siatrisv says Padmalotus encloses the universe of Nibiru “through ritualistic vibrations created by walls of sound.”

“You can feel our obscure psychedelia, uncontrolled noise, dark ambient and cathartic outbursts,” he continues. “Today our music is a sudden release of strong emotions. We have explored territories never visited before, also in terms of melodic research and songwriting.

He goes on to describe the writing and recording process of the new album – which was recorded at Aadya’s Temple.

“Our ritualised improvisation urge is still alive and well, but this time we focused more on the songs structures. As usual we have worked all together: bass, drums and guitars have been recorded at the same time. We also overdubbed synth and others instruments like didgeridoo as we wanted to get a more powerful sound. Padmalotus is our artistic peak, but only until the next expressions of our invocations. Nibiru is a forge of ideas, and nothing can stop us”.

Padmalotus is released on May 18th via Argonauta Records.