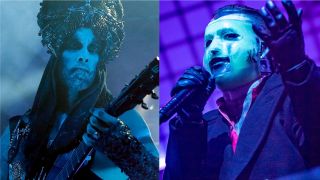 Adam ‘Nergal’ Darski says that working with Corey Taylor on the new Me And That Man album has “made my career.”

The Slipknot frontman is just one of a number of guests who’ll appear on New Man, New Songs, Same Shit, Vol.1 which will be released tomorrow (March 27) through Napalm Records.

Asked by Loudwire if there were any surprises that came with working with some of the most recognisable names in metal, the Behemoth leader replies: “Loads. Ihsahn from Emperor surprised everyone with what he did.

“All the people who’ve heard By The River have commented on how they never knew he could sing so emotionally. The world has never heard him perform like that before, which is amazing.

“And then with Corey Taylor, just the fact that he’s taking part in a niche project like this is mind-blowing to me. He’s such a busy guy, but he really took his time with this and contributed some awesome parts. Working with him has made my career, to be honest.”

Negal adds: “To be completely frank, working on this record has made me feel like a teenager again, opening Christmas presents from all these artists I respect so much.

“And I’m not taking this for granted: New Man, New Songs, Same Shit, Vol. 1 has been a great artistic adventure and challenge for me, and one I feel I’ve pulled off. Doing this has left me feeling very fulfilled.”

Last week, Me And That Man released a video for Confession.