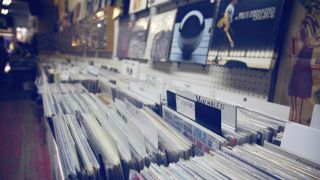 This coming Saturday (October 13) will mark the launch of the first-ever National Album Day in the UK.

The week-long event has been organised by BBC Music in conjunction with the UK music community – and will see activity across the country to celebrate the UK’s love of the humble album.

National Album Day will be marked by a spate of new releases and classic recordings spanning all musical genres, and it’ll also pay tribute to the wide range and styles of album artwork – something that has been largely lost in this age of digital streaming.

National Album Day also coincides with the 70th anniversary of the album format – and 10 points if you can guess what the first album was! Find the answer below.

Planned activities will include dedicated BBC Music programmes, retail events and artist appearances, while you can nominate and share your favourite albums on social media using the hashtag #NationalAlbumDay and by following @AlbumDayUK on Twitter.

At 3.33pm on Saturday, fans, stores, radio stations and public spaces will be invited to play their favourite albums in full. So keep an ear open if you’re out and about in the afternoon.

Chairman of Cherry Red Records Iain McNay, who is one of the organisers of the event, says: “The format of the album is so important. Even in this era of the growing popularity of streaming, the majority of artists still think in terms of writing and recording albums rather than just tracks.

“National Album Day is a great reminder of the creative thought and brilliance that goes into the making of an album, and it is a way that we can all participate by listening to and remembering our favourite albums.

“The album is the king of music formats; long live the king!”

Keep your eye on Louder, Metal Hammer, Classic Rock and Prog over the coming days for some of the best albums – and get ready to celebrate the Album in all its glory!

First ever album answer: It was Mendelssohn Violin Concerto in E Minor which was released on Columbia’s Masterworks label in June 1948. So now you know!